Dennis D. Estopace, Reporter
BusinessMirror newspaper
[March 24 for March 25, 2013]
AN OFFICER of the Armed Forces of the Philippines (AFP) said the increase in the number of soldiers, and not payment of a ransom, forced captors to release Warren Rodwell.


“It was our presence, our massive presence there that forced the ASG [Abu Sayyaf Group] to release the hostage,” said Major General Ricardo Rainier G. Cruz III, commander of the Philippine Army 1st Infantry Division in .
Cruz spoke to reporters a day after the Australian Embassy confirmed Rodwell, its citizen, was confirmed released after 15 months in captivity.
“I’m advised Mr Rodwell is now in the company of authorities, our Deputy Ambassador Andrew Byrne and a representative of the Australian Defence Force and will be moved to a safe location," Foreign Minister Bob Carr was quoted in a statement as saying.
Cruz, however, said that Rodwell was taken under the care of the AFP Western Mindanao Command and “may now be with the Australian Embassy.”
A personnel from the Australian Embassy in the has not responded to BusinessMirror’s request for information as of this writing.
Cruz, however, said that it was not only Rodwell that the AFP is concerned for but also one other hostage they believe is also hostaged by the ASG.
“Yes, we believe they still have another but maybe the ASG is holding the hostage in Basilan or Jolo.”
Cruz said that the release of Rodwell wouldn’t mean the AFP would relax.
“That notion, of sparing them from military operations, hasn’t crossed our minds.”
He added that the 1st ID has even started another “massive operation” against the ASG.
“The local government also wanted to rid their areas of kidnappers so we upped the pressure by adding more troops,” Cruz said adding that the AFP currently maintains six battalions in Basilan alone.
He said they haven’t receive any report that a ransom was paid.
Prior to his [Rodwell] release, we were already building up forces, Cruz said, up to three battalions as of December last year, Cruz said.
Now we have six, he added.
“The build up is principally because of two things: to address the ASG issue and to secure the circumferential road network in Basilan.”

dyurnalista
is where dennis estopace posts something almost everyday or when inebriated on various topics related to his work as a newspaper reporter. 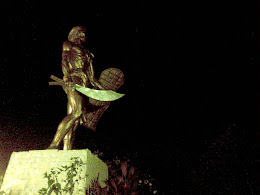